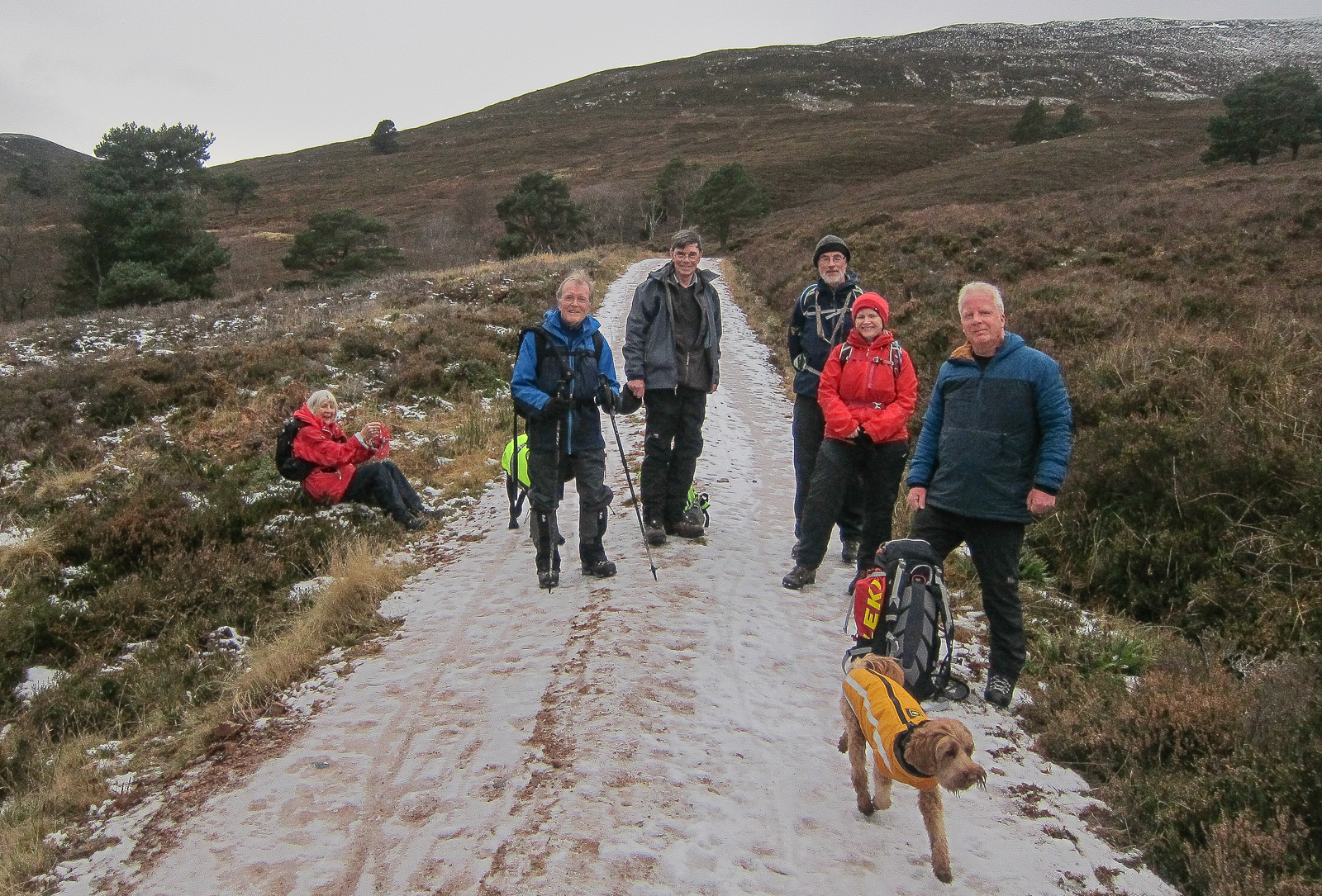 A smaller than normal group enjoyed the 2021 twixt meet, due to the uncertainty surrounding travel and accommodation for this Annual event. The destination was Aviemore and the two main accommodation providers in Aviemore and Alvie were very helpful and contributed to making the meet a success.

The walk on Wednesday (29th Dec) went to Geal Charn Mor, a Corbett to the West of Aviemore. The starting point was at the Rowntree Hotel in Alvie, and headed around the North end of Loch Alvie, where the very rare Larch Balls were noted on the shore of the Loch. (Google it to find out what they are!!)

After crossing the "A9" the group headed west on tracks following the Allt na Criche and the Allt Dubh, steadily climbing to a coll, between Geal Charn Mor and Geal Charn Beag and then headed South west to the summit of Geal Charn Mor at 824m. Although the walk started in relatively calm conditions, this deteriorated by the time the summit was reached and a cold wind combined with some precipitation encouraged the group to head down quickly without having the usual cup of tea at the top.

The route of descent followed a reverse of the ascent route and all returned safely to Alvie. Some of the group found time to travel to Kincraig to a lovely little Café for coffee and cake before returning to the accommodation for a freshen up and then headed out for an evening meal. The Hotel in Alvie were expecting the group and prepared a dining area which following Covid guidelines allowing the group to dine fairly close together.

On Thursday (30th) the group travelled a little further south and a couple of miles beyond Newtonmore. The starting point for the walk was from the "A86" near the small Lochan Uvie at Creagdhubh Lodge. The target for the day was the "Graham", Creag Dhubh and although somewhat lower than the nearby Monadhliath Mountains gave a very interesting and enjoyable walk. A herd of around a dozen feral goats were spotted early on, below the impressive crags where a spectacular waterfall made an interesting backdrop.

The walk climbed through a woodland of mature birch trees, notably heavily laden with sphagnum moss, and on to open hillside. From here the route steepened and there was an easy scramble up the south ridge, to the summit of Creag Dhubh. At the top the earlier calm conditions had given way to a blustery wind and after finding a sheltered spot, the group were able to have the customary, cup of tea and sandwich, before retracing steps back to the starting point.

From here the group returned home, stopping of at House of Bruar for a coffee. In general the weather, apart from being blustery on the tops, was relatively calm and mild for December