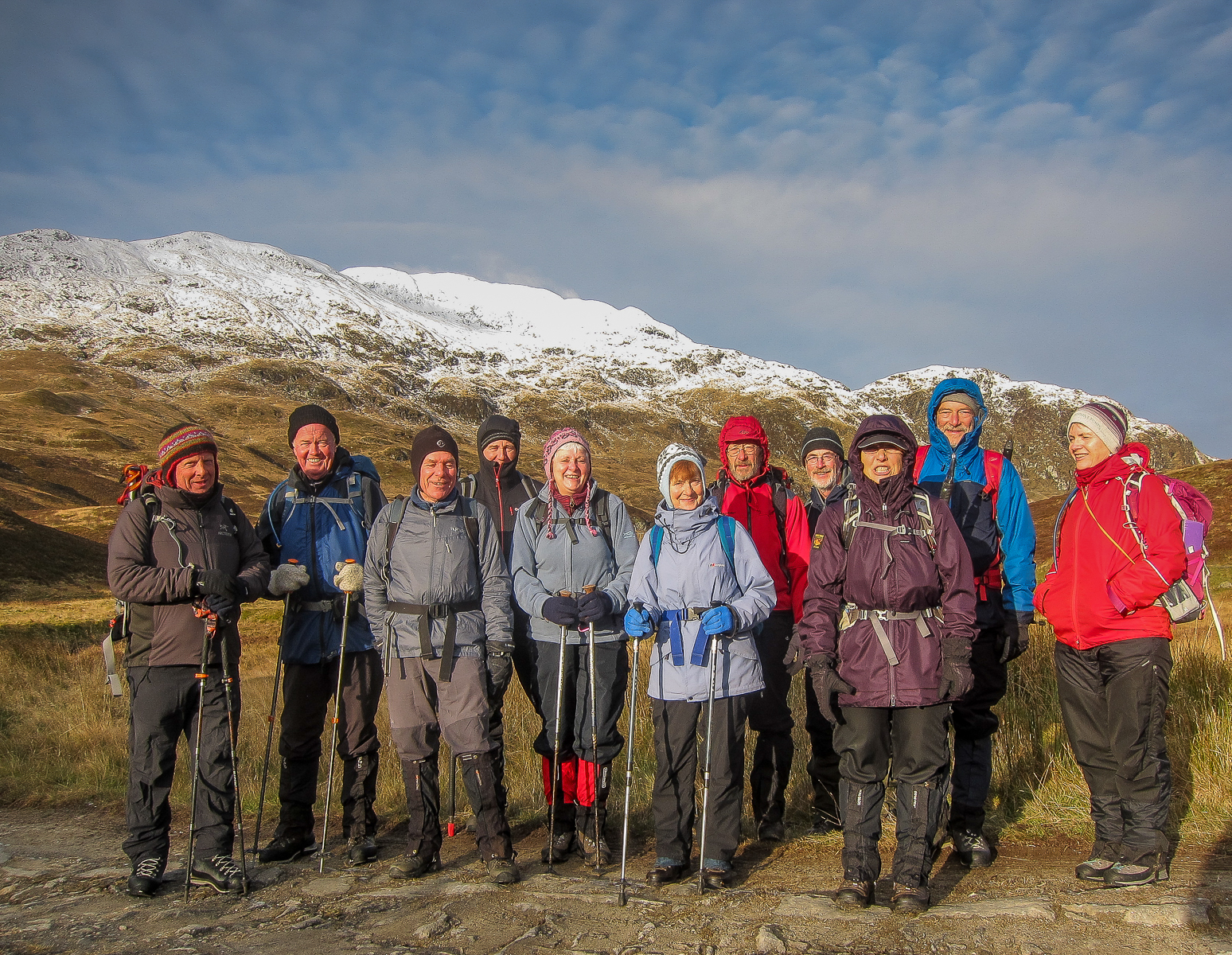 On Sunday 17th Nov. the club ventured West with Meall nan Tarmachan on Loch Tay side as a target. A reasonable turn out of members travelled through low patchy cloud to arrive at the Lawers carpark in pristine weather conditions. Although the temperature was below freezing point the target hill was clear of cloud and basked in low morning sunshine. The summit of Tarmachan was looking spectacular from the starting point with a covering of snow whilst the nearby Ben Lawers was partly shrouded in cloud. The group split in to two sections with the "A" party choosing to walk west and tackle a complete traverse of the ridge from west to east. After an hours walk the group ascended to the first of four summits, Creagh na Caillich. At this point the earlier sunshine gave way to low cloud which was to remain in place for the remainder of the day. Undaunted the group pressed on over Beinn Eachan and Meall Garbh to eventually reach the Summit of Meall nan Tarmachan. The snow covering on the summit ridge was icy and quite treacherous in places and the wind was varying in strength making navigation a challenge in the poor visibility. The route of descent followed the "tourist path" south crossing over steep ground and Icy paths, from the summit back to the starting point.

The "B" Party starting at the same point made a more direct ascent of Tarmachan and reached the summit much sooner and returned to the starting point by a reverse of their ascent route. There was not a lot of wild life to be seen due to the low cloud, Ravens could be heard croaking away as the groups ascended and the odd Ptarmigan was heard, but not seen. There were many animal foot prints in the snow ,most noticeably Mountain Hare and Red Deer. As the groups descended the cloud level slowly rose and gave fine views of the distant hills in-between swirling cloud.

Also taking place on Sunday was the second of our Navigation courses organised by Mountaineering Scotland. A group of 5 members were given expert instruction from Ian Stewart who once again guided our members through various techniques of navigation, making for a very well received and entertaining day for both novice and expert alike. The course was conducted on Ben Vrackie, and being a bit lower than Meall nan Tarmachan, was cloud free and allowed for magnificent views. Once again, our grateful thanks to Mountaineering Scotland and in particular Ian Stewart for the excellent course.