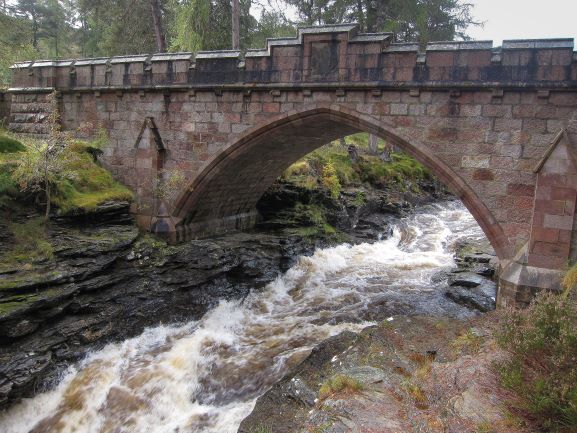 The Club walk to Linn of Dee on Sunday 6th October was well attended and numbers made travel by coach viable to our destination. The forecasted wind and rain was accurate for the start of the walks but as anticipated soon passed and by 11:00am drier conditions prevailed.

The first of the walking groups started at Victoria Bridge and crossed the River Dee which was in spate with the overnight and early morning rain swelling the flow. The group headed towards Mar Lodge and followed a track to Linn of Quich and the Punch Bowl. From here they headed along the west side of Quich Water and into Glen Quich before turning west into the narrow cut valley of Clais Fhearnaig to reach Glen Lui and the walk South on the track back to the Linn of Dee Carpark.

The second group started at the Linn of Dee carpark and headed North through the forest to begin with and then the more open country side of Glen Lui. Turning East and into Clais Fhearnaig to reach the lochans before ascending over high ground to reach the 668m summit of Creag Bhaig, the Graham which dominates the back drop of Mar Lodge. From here the group descended to pick up a track and head back to their starting point at Linn of Dee.

A third walk completed on the day also started at Linn of Dee and followed the River Dee East to Victoria Bridge and then returned on the North side of the river back to the starting point.

There were some fine views to be had in the cloud breaks from the top of Creag Bhaig and the walkers were never far from the sound of Red Deer Stags bellowing in the valleys below, the rutting season now well under way.