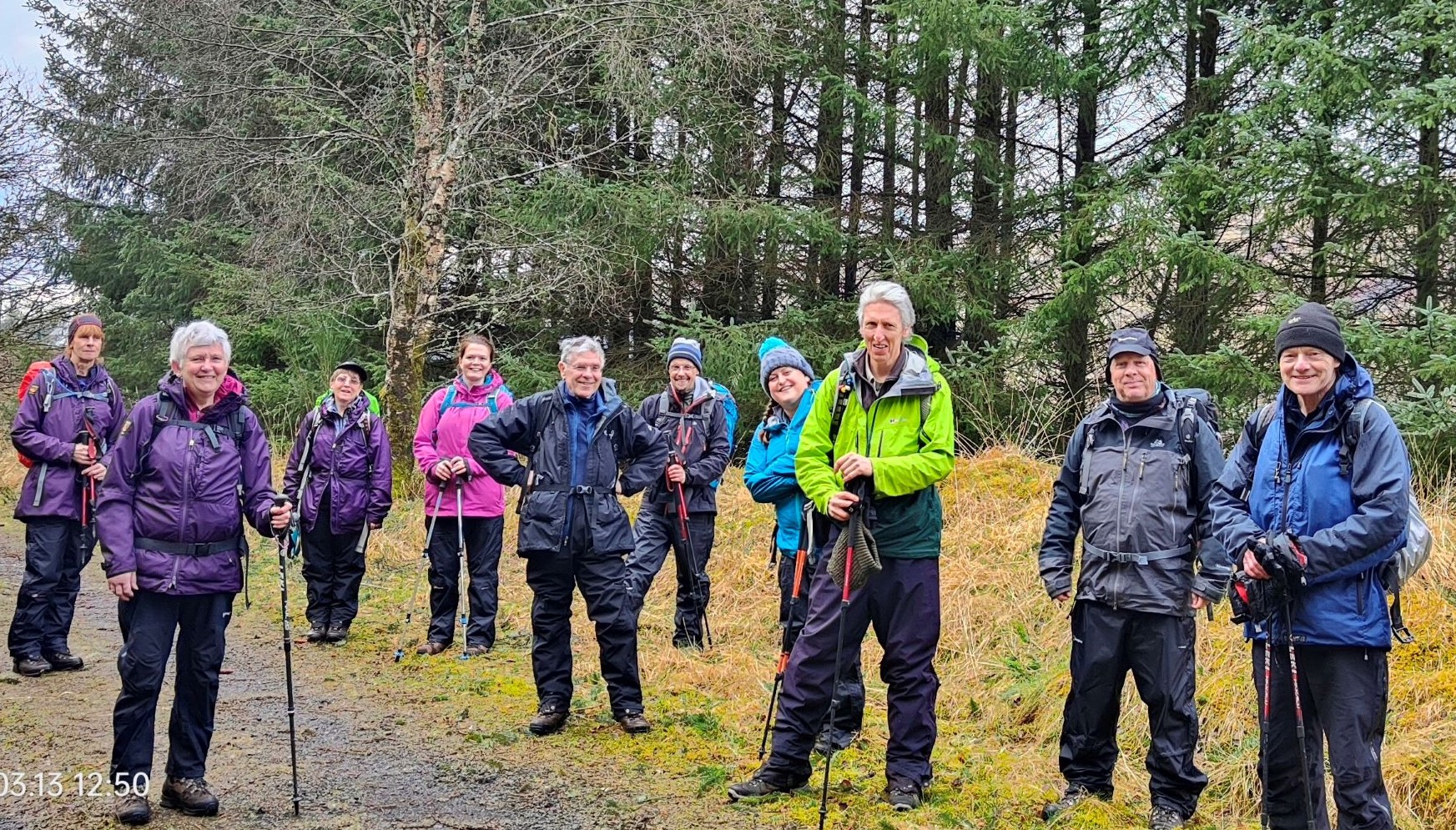 On Sunday, 14th March, a good turn out of members travelled to the Glen Ogle/Glen Dochart area for our Club walk. As on previous walks a Larger than normal coach was booked giving more space to social distance and travel in more comfort. The planned route to the summits was curtailed because of the poor weather forecast and a lower level option was to follow the dismantled railway lines from Lochearnhead to Killin via Glen Dochart. A shorter option involved a start and finish in Killin.

The main route started in the Village of Lochearnhead and rose sharply to join the rail line above the village and then head north. After the initial steep climb, the remainder of the day was on virtually level ground and with the good foundation of the old railway line made for brisk walking. Heading north the group passed over the very impressive Viaduct in Glen Ogle.

From here the main group continued on to Lochan Lairig Cheile, in good time to stop for elevenses. There were 3 pairs of Canada Geese on the loch and making an eerie sound as their mating calls echoed around the mist cover Lochan.

The walk continued north and then west into Glen Dochart before then turning east and dropping slowly down to Killin. Apart from a short muddy section where there are major Civil Engineering works ongoing, the underfoot conditions remaind excellent for walking.

As the group approached the village the roar of the water could be heard tumbling and thundering over the rocks at the ever spectacular Falls of Dochart where the river had swollen following 24 hrs of rain and drizzle. Arriving back earlier than planned had the advantage of having time to stop at a coffee shop for Cake and Coffee a very welcome treat for peckish walkers.

There were several reports of Buzzards circling above and a Red Kite was spotted near Lochearnhead. Flocks of Goldfinches rushed from tree to tree along the route intermingled with the very melodic Chaffinches, Great Tits, Blue Tits and the noisy Canada Geese. Many frogs were spotted in the small trackside pools and freshly laid frog spawn was in abundance.

The shorter route was the same as the club walk on 15 August 2021 on a hot sunny day. Today was quite a contrast to the previous outing when we climbed Creag Garbh. This group followed the Rob Roy Way East from Killin  uphill , with a stiff climb to the mast at a high point before Loch Breaclaich. From the mast, they struck off the Rob Roy Way south west , then south and west following a variation of the Rob Roy Way through mature conifer plantations  with occasional glimpses of the Lawers Range and mountains of Glen Dochart, to pick up the cycleway and railway line  back to Killin.