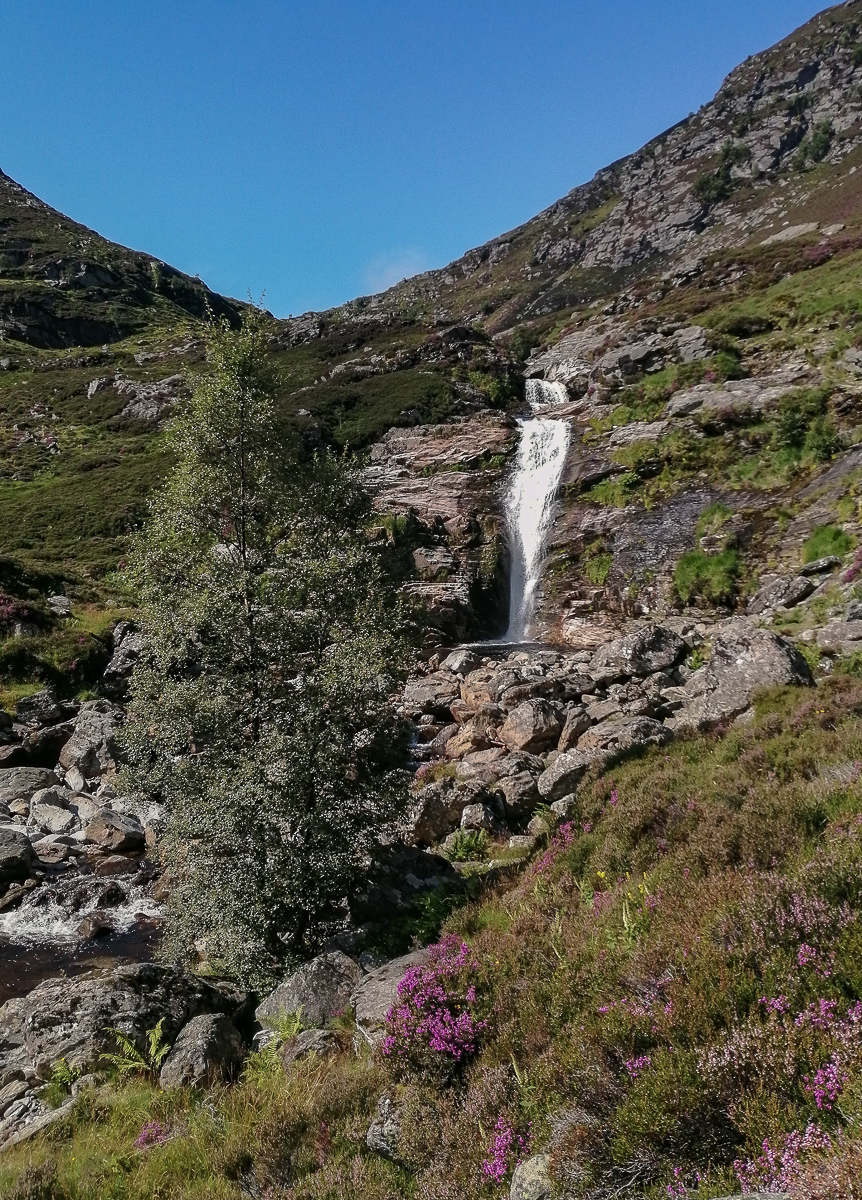 On what proved to be one of the warmest days of the summer, a good number of Club members travelled to Glen Esk to start a memorable day in the Angus Glens. Observing Covid guidelines, the group travelled in a convoy of cars to the starting point at Invermark. On arrival, there was low mist and cloud on the hill tops, which very soon lifted and with little or no breeze, the day turned out to be a scorcher.

All walks began at the carpark and headed west, passing the very impressive ruined Invermark Castle, which was originally built in the 1300's as a Tower House guarding a pass which crosses from Deeside to the South. The "House" fell into disrepair in the 1800's after having been renovated in both the 1500's and the 1600's. A short distance on from the Castle the route passed the ruins of the Old Parish Church of Loch Lee which has it's origins in the 8th Century and reputably dedicated by St. Drosian. There are around 30 grave stones in the Church yard, the oldest dating back to 1595.

From here the walk travelled along the Land Rover track on the North side of Loch Lee towards Glen Lee, before climbing steadily to the spectacular Falls of Unich on the Burn of Slidderies . After passing the second set of waterfalls at Damff higher up on the same burn, this group turned North West to take in the summit of Hunt Hill, giving a splendid, uninterrupted view west to Lochnagar.

From here the group split into the A and B walks, the B group continuing north and dropping steeply down into upper Glen Lee and following the Water of Lee back to Loch Lee and a return to the starting point. The A group returned to the small wooden bridge above the Falls of Damff and continued east rising to the top of Cairn Lick. This vantage point gave splendid views along the length of Loch Lee and as far as Mount Battock to the East.

There were notes of much wildlife and many mountain plants. Of note in the fauna was the Bell Heather in full bloom and the Ling Heather and many clumps of Cloud Berries, Crow Berries and Blae Berries. There were sightings of Common Lizards, Brown Hare, Roe Dear, several raptors, Grey Wagtails, Wheatears, and Meadow pipits.