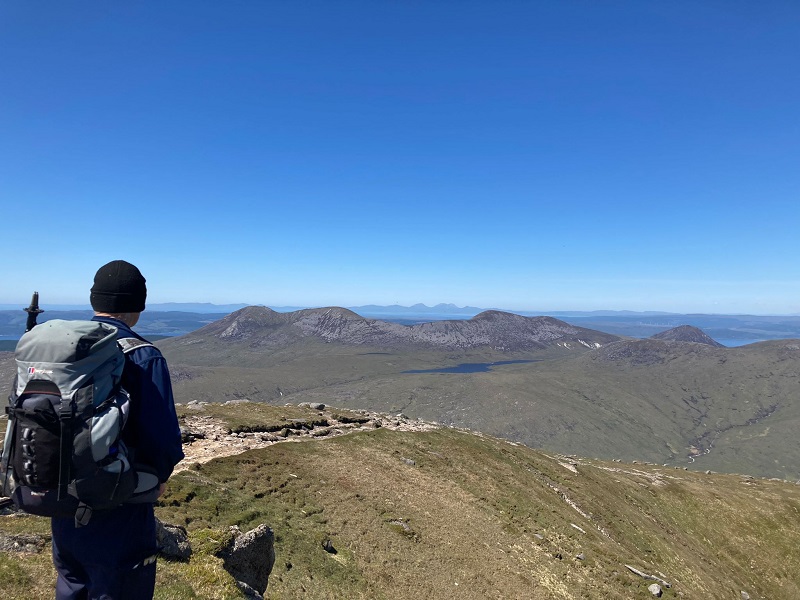 Twenty-four club members made their way over to Arran, most on Friday 3 June with a few stragglers on the following day.

The majority elected to climb Goatfell by a more challenging route than the usual tourist route from the grounds of Brodick Castle. Instead, they took the route from Glen Sannox, for some members it was their first taste of hands-on rock scrambling as they made their way to the summit. The weather, as it remained for a full four days, was perfect with great visibility as a bonus.

Later that day the entire group met for the traditional Saturday evening meal, this time at the impressive Auchrannie Resort restaurant. Organised as usual by Evelyn Menzies, it turned out to be an inspired choice and enjoyed by all.

The Sunday saw most of the group heading to the west of the island to climb the hills east of Pirnmill, including a Graham (Bheinn Bharrain) – the views across to the Goatfell rage were stunning.

After the Sunday, some members reluctantly headed home with others staying for the following week and others returning on various days within it.

Monday saw many of the group enjoying an exciting  across to the Holy Island from Lamlash, the sea helped any nerves by being a flat calm.

The weather held until the Tuesday night with Weds being a bit of a wash out but the remaining days improved and various parties undertook more hill walking. The remaining members together with visiting family enjoyed a social evening together in one of their rented holiday homes on that Weds evening.

The remaining days whilst windier, remained largely fine and a number of walks were enjoyed, including a trip to the Holy Island via the local ferry and a wee climb to its peak – Mullach Mor. In addition, a paddle boarding excursion was enjoyed as well as beach walks and visits to various tourist attractions. Ken and Roddy enjoyed what they described as one of the best days ever on a scrambly route around Cir Mhor.

The accompanying photos cover many of the walks enjoyed by the various parties.

Arran truly lived up to its reputation as being ‘Scotland in miniature’.

Another great time away for the BDHC members.